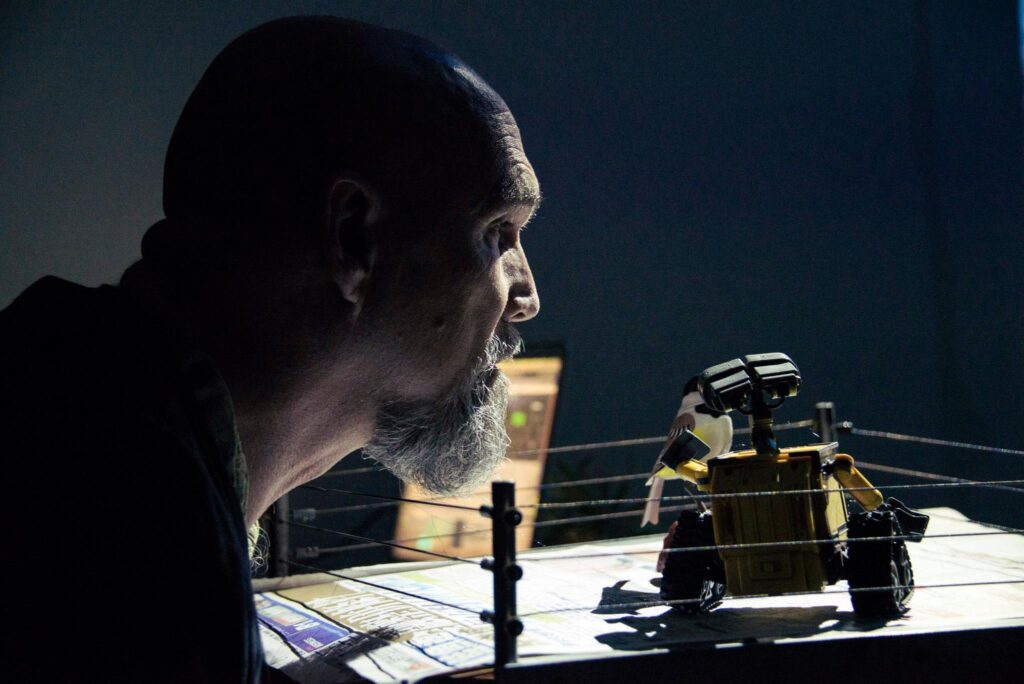 Beginning the late 1960s, Pierre Hébert had been experimenting with animation as live performance, creating frame-by-frame animation by carving directly on 16mm film with a knife while on stage. Over the years, he developed virtuosic skill at this unique craft. He often performed in duo with improvising instrumentalists, including Bob Ostertag.

In 1999, Ostertag’s friend Joshua “Kit” Clayton was developing what would eventually become the well-known video processing language known as Jitter. He showed his work to Ostertag, who quickly saw how Clayton’s software could be used to allow Hébert to take the techniques he had developed for years scratching on film with a knife, and apply them to any medium he wished, capturing the images with a video camera and projecting them as he went. The software Ostertag created become the core tool of Living Cinema, and enabled Ostertag to assemble the sound on stage in parallel to the image. Living Cinema’s first work, Between Science and Garbage, is likely the first ever work made using Jitter, long before the software was on the market and even before it was in beta. The constant evolution of this software, in response to its continual use during performance, became an integral part of the evolution of Living Cinema.

However, the Living Cinema esthetic was never about the amazing marvels of the digital age. Instead, Living Cinema used the process of live animation as transparent as possible by constantly staging the confrontation between the bodily actions of the performers and the processing power of the machines for all to see. Performances became tense and volatile, with human performers frantically attempting to keep up with the technology’s demand for more input of image and sound, mirroring the increasingly frantic life of the citizens of the digital world.

After some exploratory performances in early 2001, Living Cinema found its legs at a concert at The Walker Center for the Arts in Minneapolis on September 20, 2001, days after the attack on the World Trade Center in New York. It was at this concert that the performers learned the power of live video performance as a commentary on world events. Cinema created on stage during performance cannot compete with conventional cinema in many ways, but it can respond to world events in ways movies which spend months or years in production cannot.

Between Science and Garbage eventually became a DVD released by John Zorn’s Tzadik label. This was followed by Endangered Species, Shadow Boxing, and other works. But each piece was really a sort of framework for constructing a live cinema performance, the content of which would constantly evolve in response to the world news. By the end of the Living Cinema project, concerts would begin with the projected image of the front page of the newspaper of whatever city the performance was in.

There are quite a few videos of Living Cinema concerts on Youtube. Ostertag and Hébert always had mixed feelings about recordings of Living Cinema concerts. At the concerts, it was clear that this was a live performance created on stage in precarious technical conditions which could break down at any time. It was frantic, fraught, and funny. The audience could see Hebert and Ostertag making the images and music by hand, as well as watching the projection on screen. When watching a video recording of a Living Cinema concert, however, the view of the liver performers is missing. Only the projected image is presented, the viewer is placed in the same position as when watching movies that took years to make and in which every edit was fine tuned over many months. When judged the criteria of conventional cinema, Living Cinema recordings fail. However, now that Living Cinema is no longer performing, these recordings are what is left.

The complete Between Science and Garbage, released on Tzadik, is available on YouTube here: 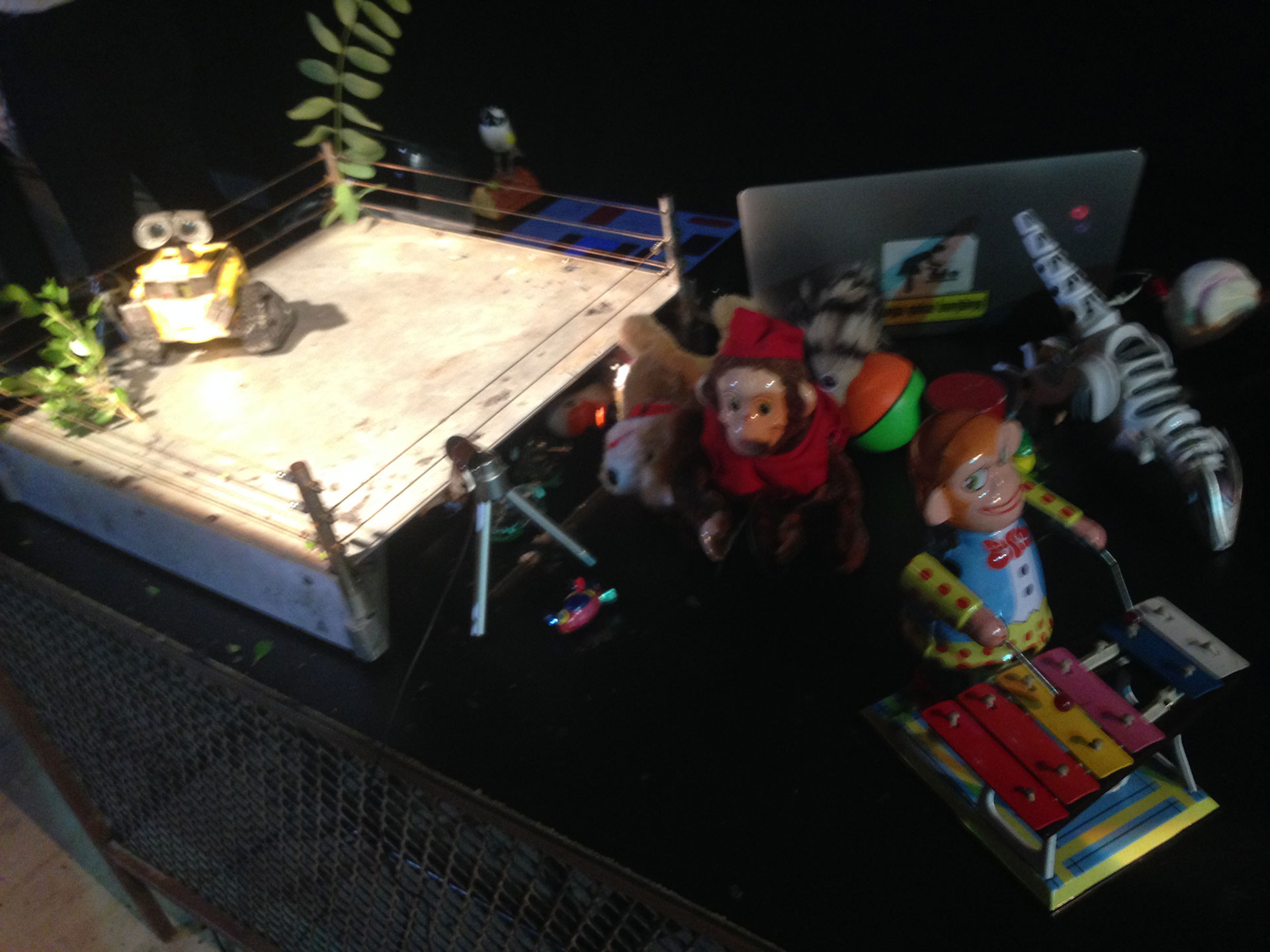 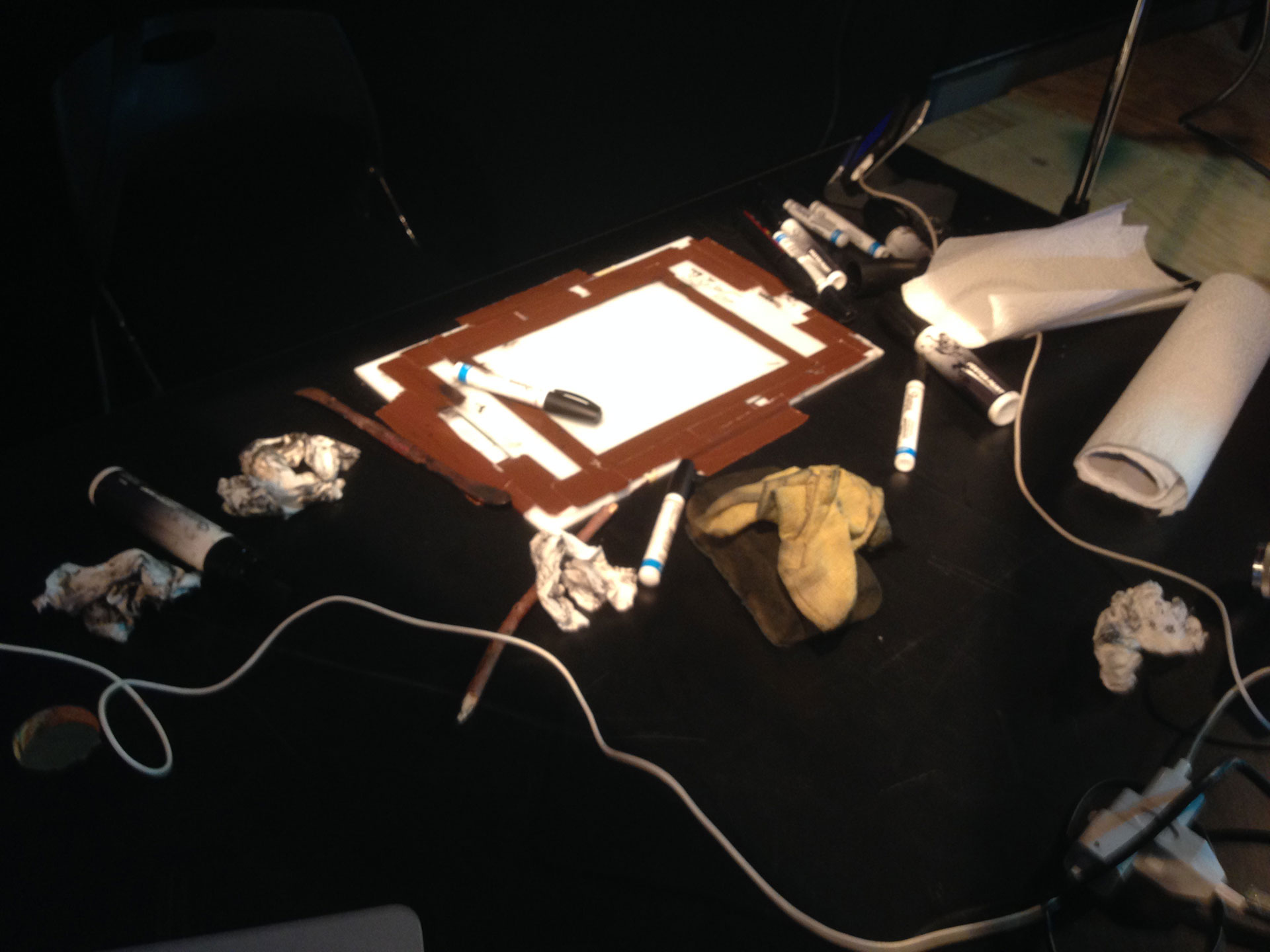 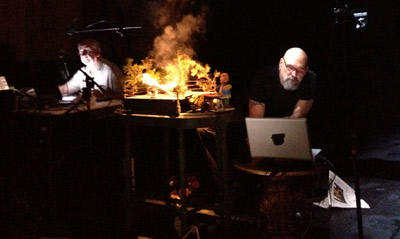 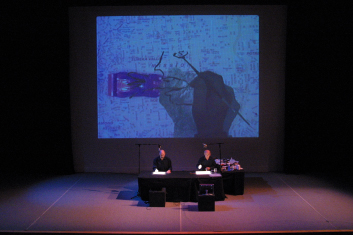 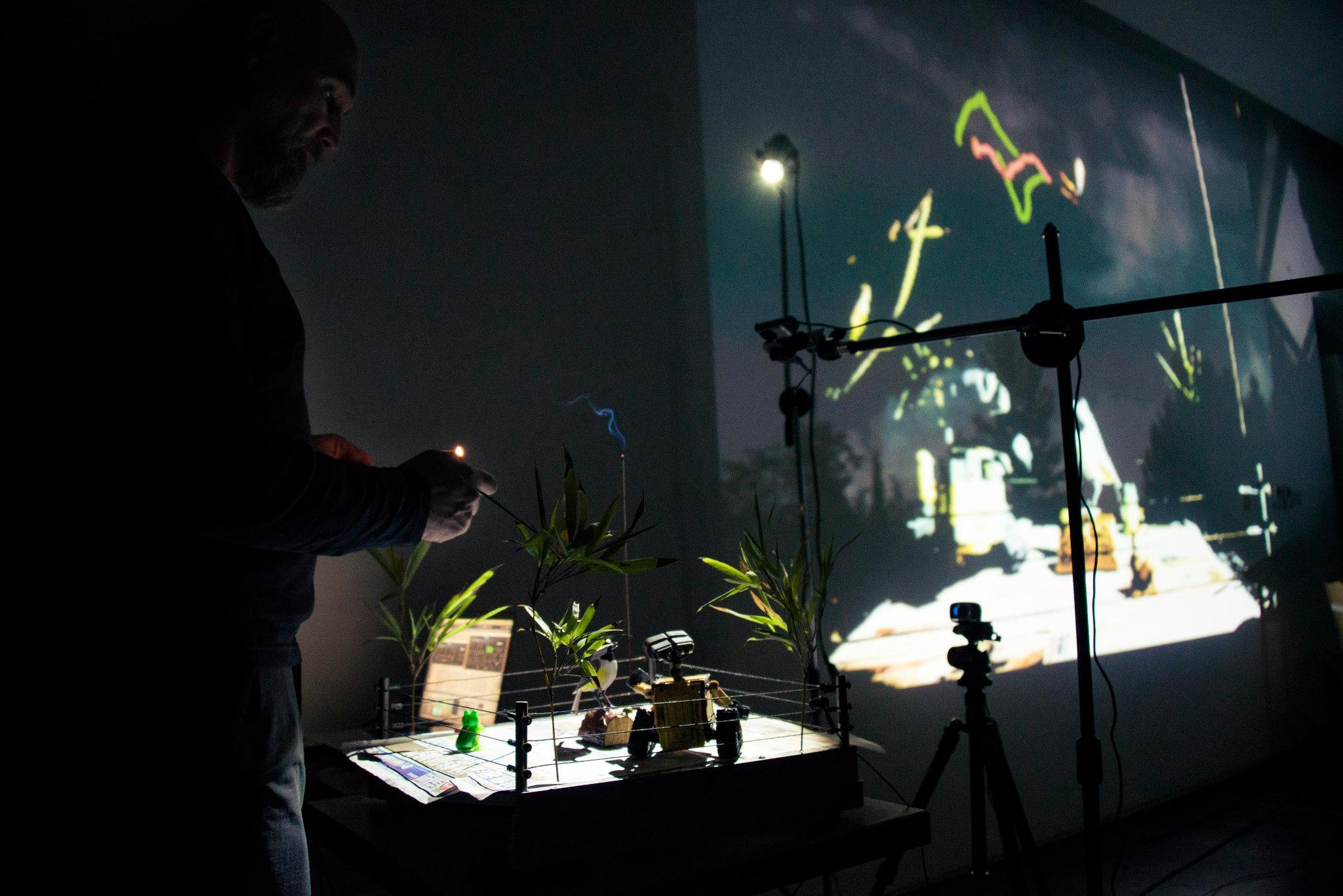 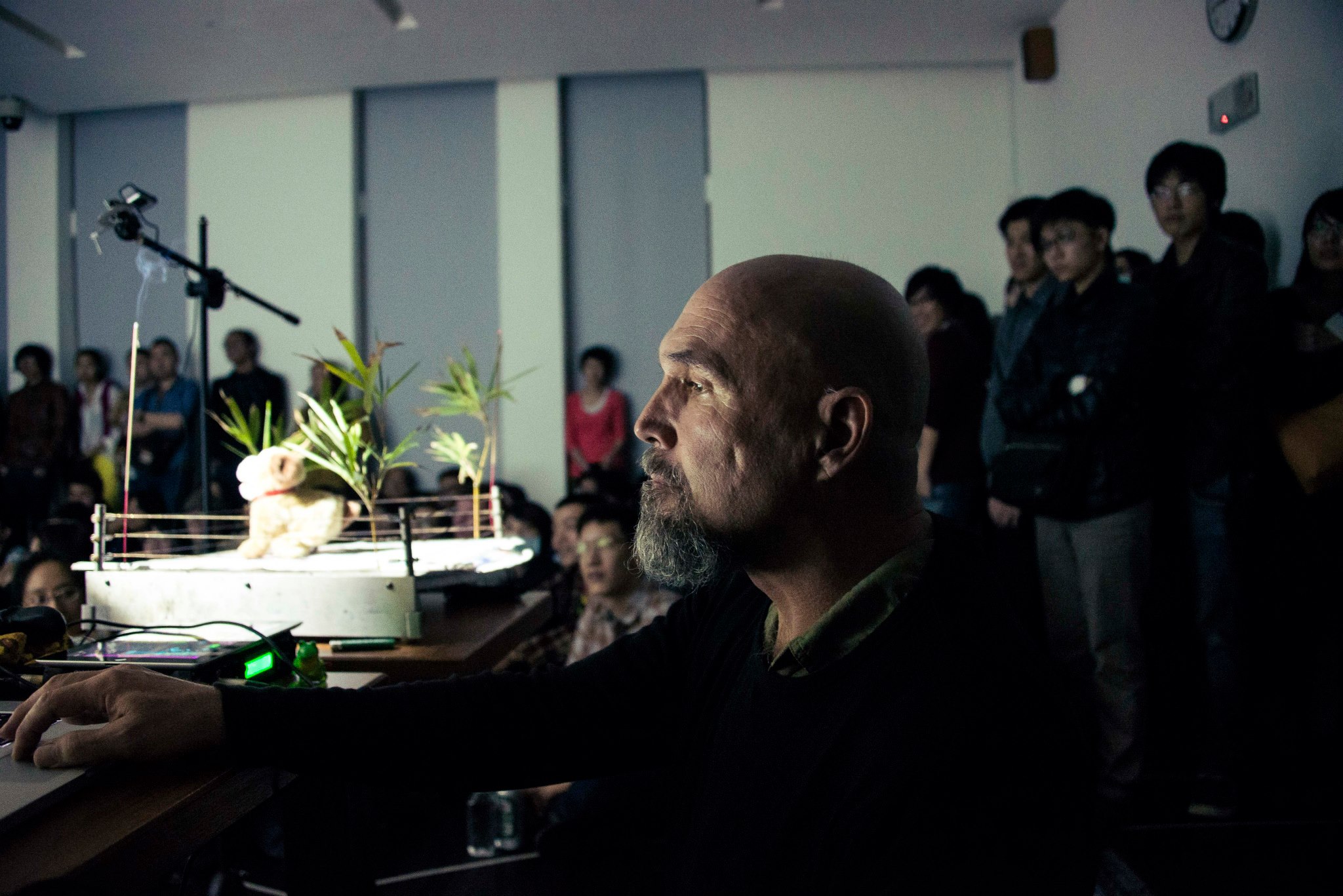 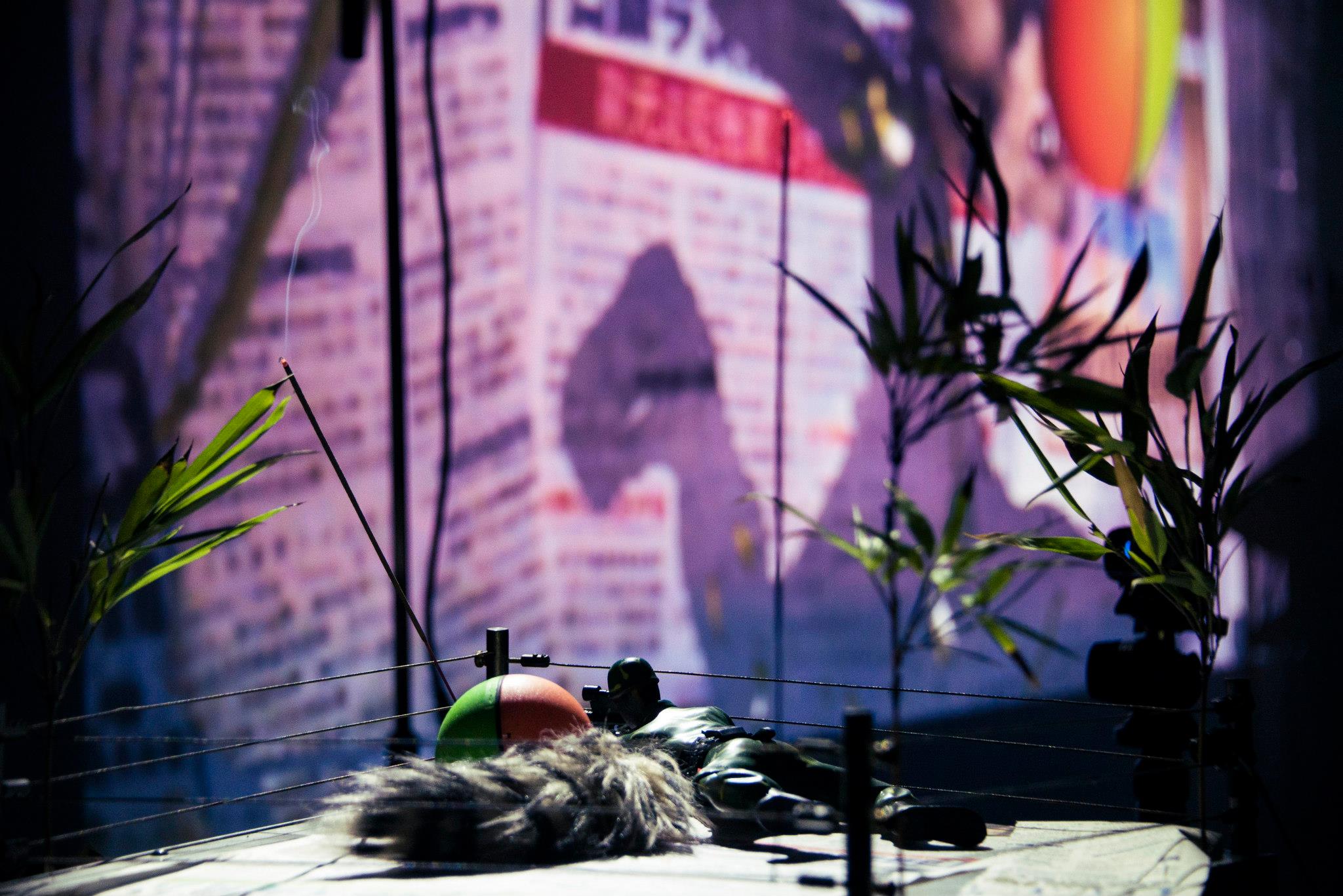 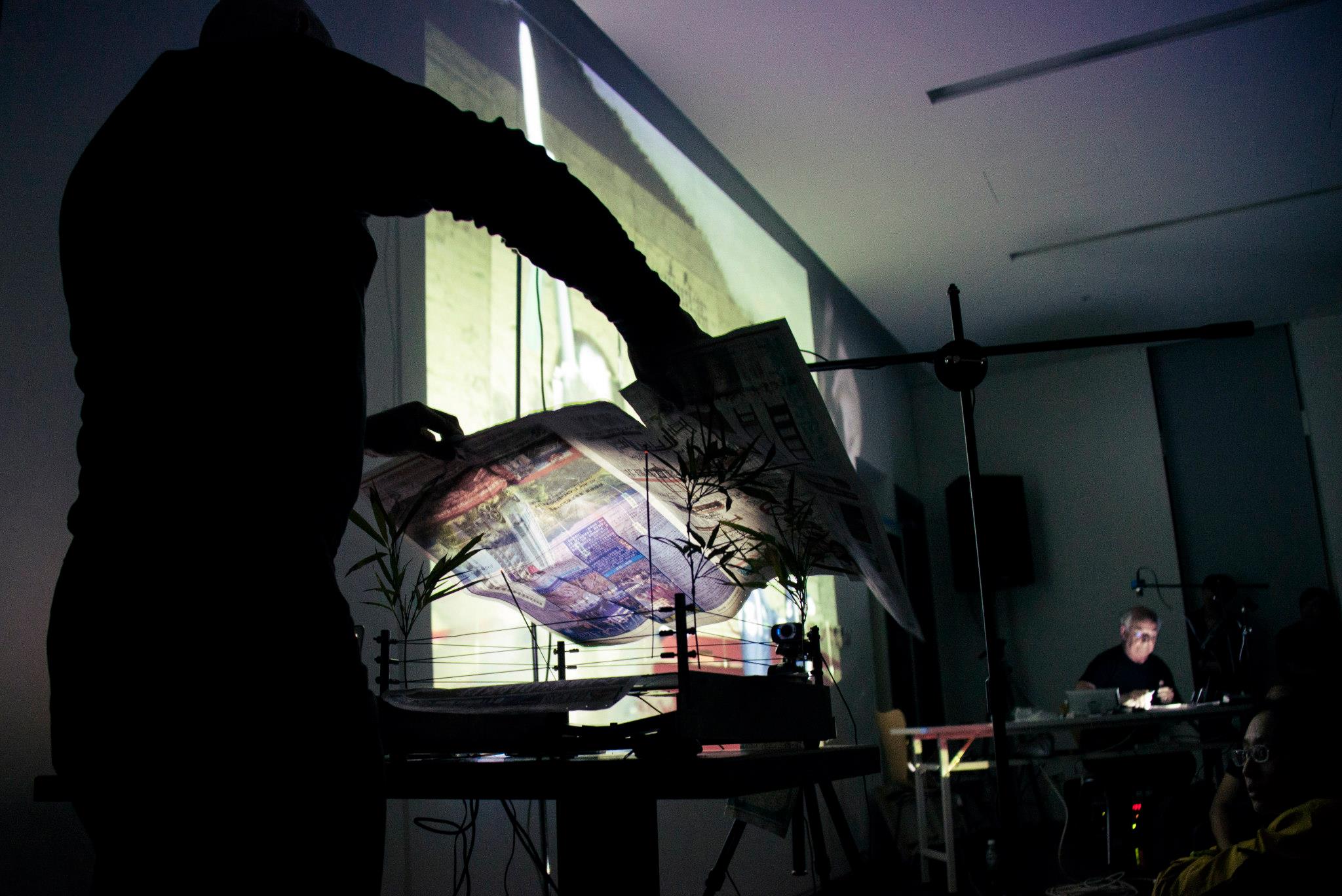 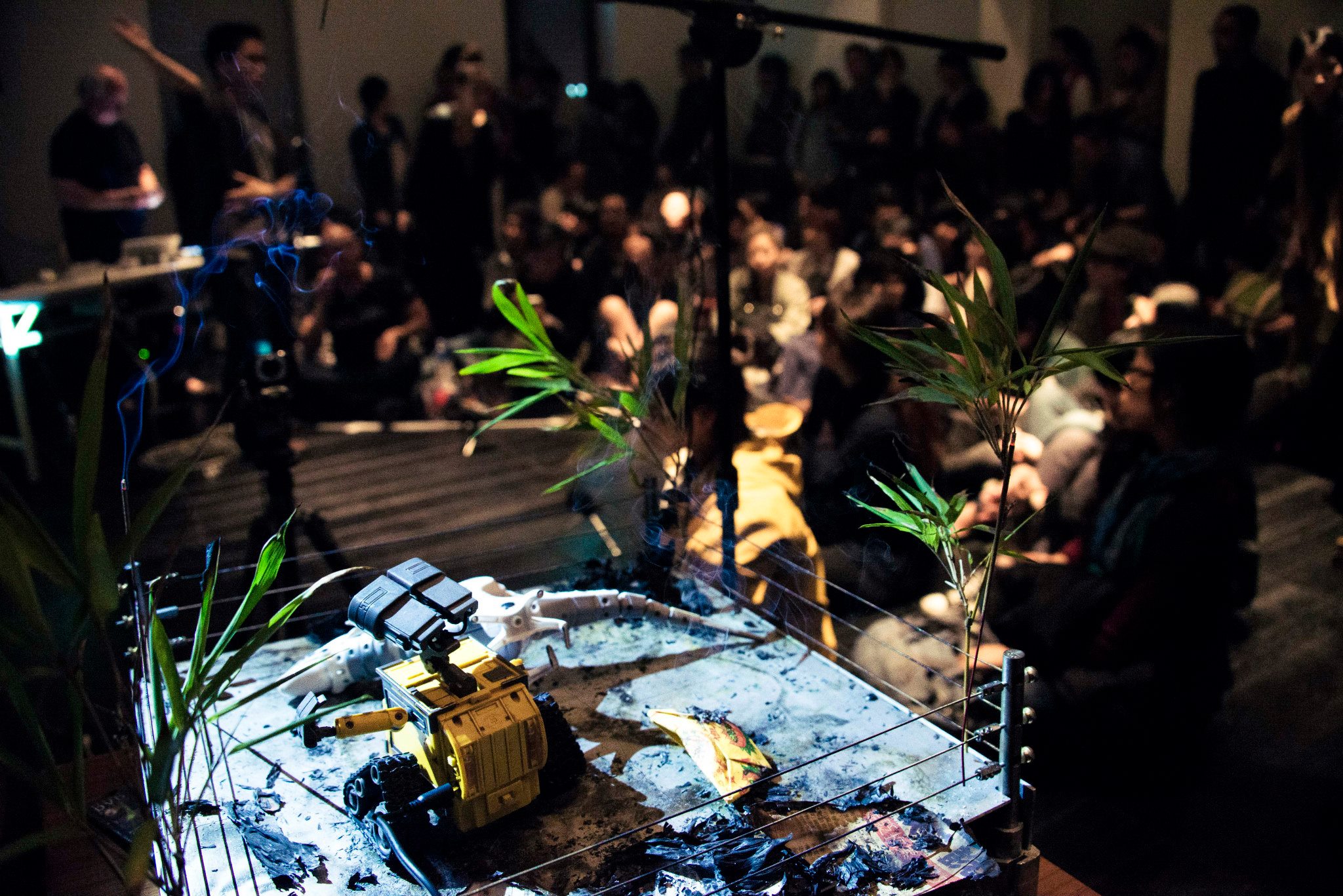 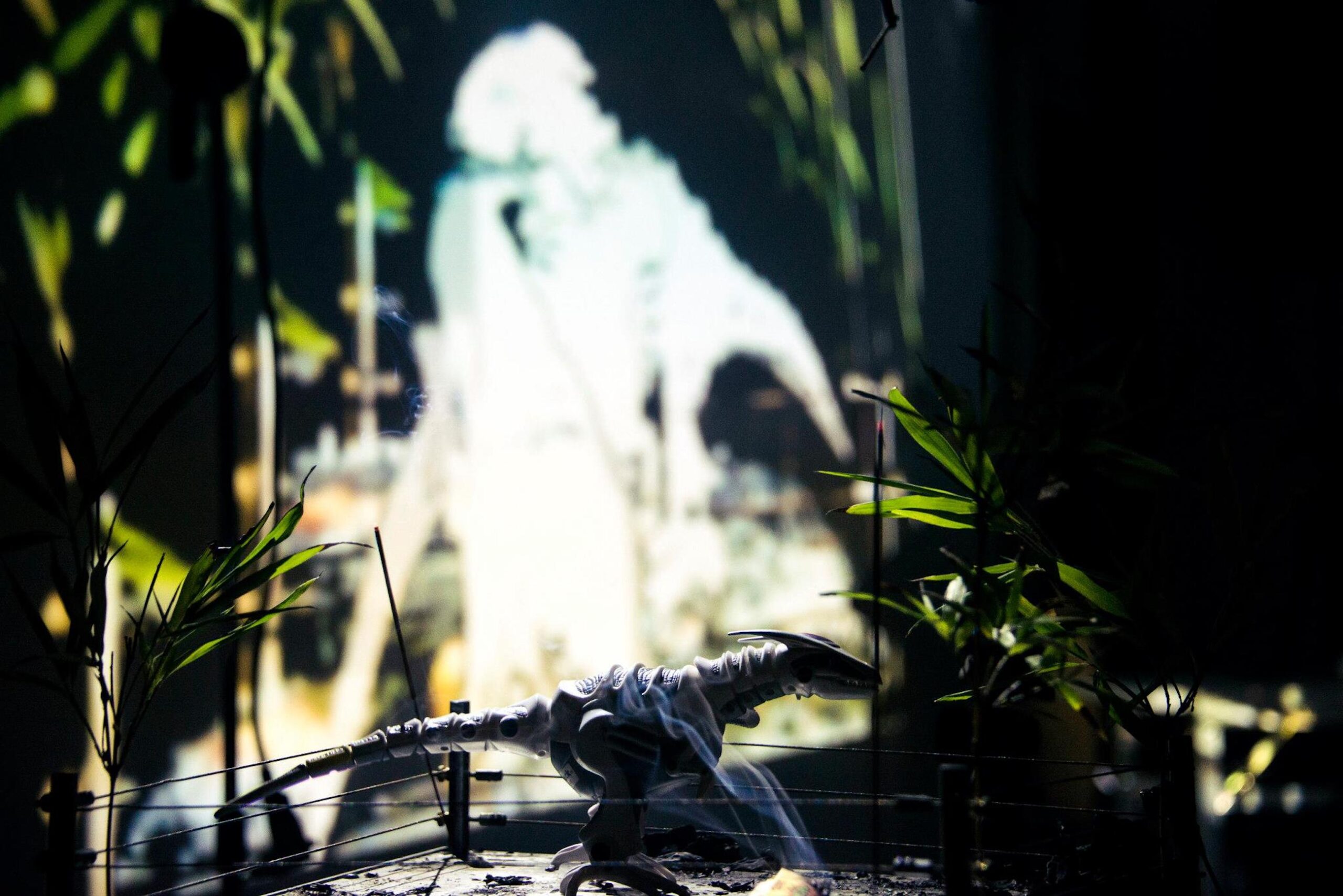 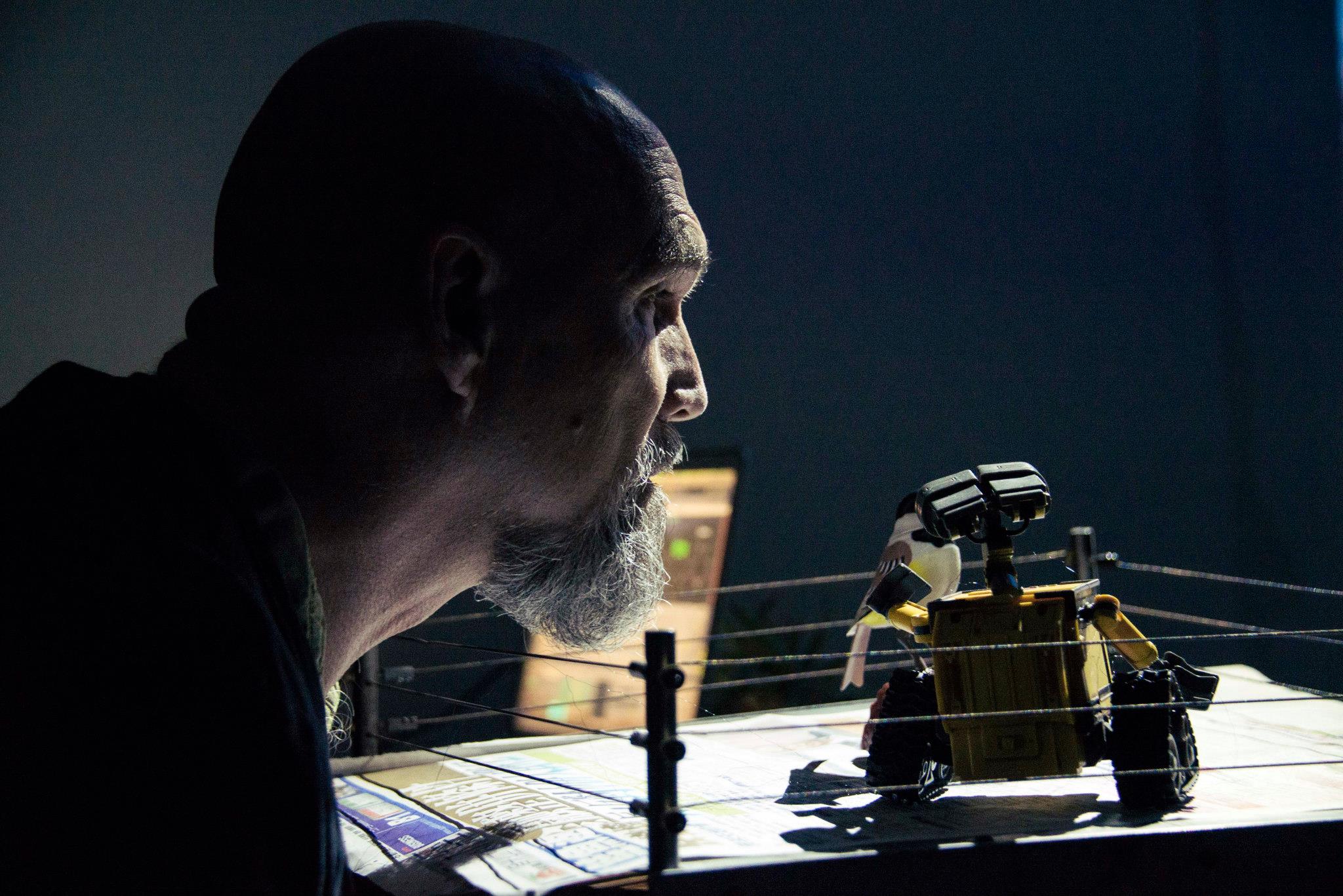 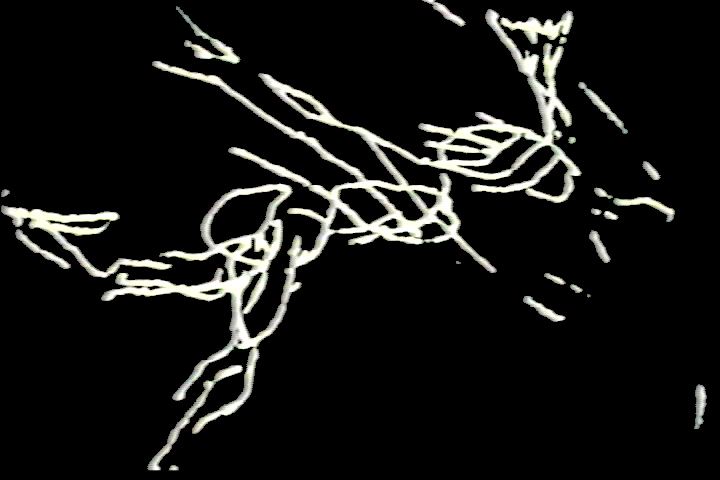