Meet Piero Ruscelli. One of the 3 producers of my concert in For, Italy at Area Sismica. The only place I know where a man like Piero, who never went to college or high school and worked as a barber since 13 years old, never left his tiny home town, would run a jazz club and bring me to Italy to play. He has been working in his shop for 35 years. Keeps a cello and a music stand in the corner and plays Bach in between customers. AND my beard is going to look sharp for the show. I LOVE ITALY! 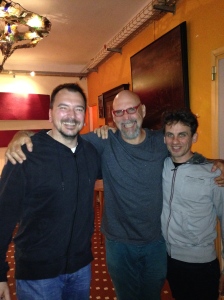 Gionni, Piero the barber, and Ariele Montiare the triumvirate behind Area Sismica, an amazing music club in the countryside of Romania an hour or so from Bologna. Area Sismica is a parallel universe in which all the food is delicious, the drinks are strong, people from rural areas do everything they can to stay where they are from instead of leave as quickly as possible, barbers and factory inspectors and dentists spend their spare time organizing concerts of adventurous music, and concert promoters treat visiting musicians like their best friend. If I could figure out how this parallel universe exists. I would win the Nobel prize in physics.